Johannes Gutenberg made radical improvements in the printing press and introduced the concept of the Blackletter typeface. The Blackletter typeface (also sometimes referred to as Gothic, Fraktur or Old English) was used in the Guthenburg Bible, one of the first books printed in Europe. This style of typeface is recognizable by its dramatic  thin and thick strokes; and in some fonts, the elaborate swirls on the serifs. Blackletter typefaces are based on early manuscript lettering.

Gutenberg’s invention of printing is without doubt one of the most important in history because it allowed common people to share the knowledge that had been in the hands of a select few for a millennia.

But since the blackletter fonts were not clearly visible in a body of text the roman typefaces emerged in 15th century. Nicolas Jenson was the one to create Jenson typeface. Jenson acted as Master of the French Royal Mint at Tours, and is credited with being the creator of one of the finest early Roman type faces. The Jenson family of typefaces were very clear and legible as compared to the blackletter of Gutenberg as they were based on straight lines and regular curves.

While Gutenberg used blackletters for his bible and books, this change signaled a new era in typefaces used for printing. Blackletters are difficult to read as body text and Roman and Italic faces were easier to print with movable type. For these reasons, in the 1500’s, blackletter became less popular for printing in many countries except Germany and the German speaking countries. 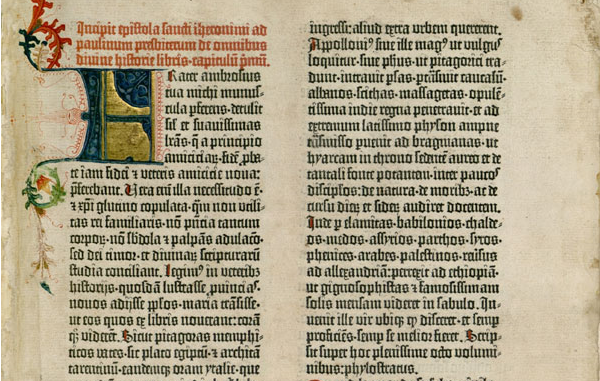 The type designed for the book, called Bembo, was even more readable and harmonious than similar ones produced by Jenson. Its refined proportions allow the eye to flow smoothly across the page. Along with Jenson-Eusebius, Bembo is the basis for the group of roman types called “Old Style”, which grouped are distinguished by their understated contrast, bracketed serifs, and diagonal stress.

Another important old typeface is Garamond, which is a group of many old-style serif typefaces, named for sixteenth-century Parisian engraver Claude Garamond (generally spelled as Garamont in his lifetime). Garamond-style typefaces are popular and often used, particularly for printing body text and books.

In the 17th century, a time when the Old Roman Style faces had established across much of Europe, there was continuing typographic development, resulting in a new class of typefaces called “Transitional”. Transitional typefaces are a mix between Old Style and Modern typefaces. Examples include Baskerville, Georgia, and Times New Roman.

By the patronage of the French Royal government government committee at the Academy of Sciences was set up and Philippe Grandjean de Fouchy was appointed to cut the new typeface thus leading to the development of Romain Du Roi typeface in 1692 which the first scientifically developed typeface, giving typography it’s modern definition:

‌Typography is a field that requires a synthesis of many disparate skills: the practical know-how of the annual worker, the creativity of the fine artist, and the logic of a scientist.

The conception of the romain du roi letterforms reflects a difference in attitude from the prevailing roman typefaces before it. Whereas previous roman typefaces developed naturally over time, evolving in the hands of punch cutters from the typefaces of the fifteenth century, the Romain du Roi was the result of rational design: the letterforms were mapped on grids before being cut into metal.

English printer and typographer John Baskerville established this style in the mid 18th century. Compared to earlier designs, Baskerville increased the contrast between thick and thin strokes, making the serifs sharper and more tapered, and shifted the axis of rounded letters to a more vertical position.

The most famous transitional style font of Britain, Caslon was widespread in use due to its solid functionality and legibility; like Helvetica was in second half of 20th century. It became an integral part of the British national identity.

Caslon types were distributed throughout the British Empire, including British North America, where they were used on the printing the U.S. Declaration of Independence

Modern typefaces have extremely large variations between thick and thin lines. These are good for headlines (as seen in Vogue, Elle, etc.) Examples include Didot, Bodoni, and Elephant.

Didot was similar to the painting style neoclassicism. They revived the linear style of Renaissance.‌ It would soon become the most influential modern face, because it set the standard for contrast, stress, and geometric structure.

Bodoni adopted many innovations of Didot but was less adventurous as compared with Caslon and Baskerville, and would prove to be more popular than the startlingly original Didot.

Europe adopted Roman typefaces with the only exception being Germany where blackletter was increasingly seen as a part of national identity. During the period of Nazi rule Hitler announced blackletter typeface Fraktur as part of German nationalistic symbol and banned the use of any other typeface.
‌

Industrial Revolution and The advent of Sans Serifs

19th century saw great rise in printing press capacity (due to inventions such as steam press) which led to the rise of the profession of graphic design. Industrial Revolution led to large cities and mass culture and advertising. Sans serifs were developed after coming of mass media and print culture.

It was easier to print Sans Serifs and a lot of information could be printed in limited space, which made it the best choice for print houses. Sans serifs although very dissimilar to modern Roman typefaces derived shared qualities like vertical stress and strong geometric structures. Sans serifs found application in advertising where large headings were printed. They are used in bold statement. The last decade of the 19th century witnessed the introduction of first professionally designed sans serif typefaces, such as Akzidenz Grotesk, released by the German foundry Berthold in 1896.

‌The Sans Serifs were extremely good in utilising the space but were less appealing to the human eye, one reason maybe the widespread use of sans serifs in all weights, shapes and sizes thus slab serifs were developed to catch the attention of the viewer. Slab-serifs (originally called Egyptians) first became popular in the wake of Napolean’s Egyptian campaign (1801) and coincided with the beginning of the industrial revolution. More specifically they evolved in line with Koenig & Bauer’s updated printing press that revised Gutenberg’s centuries-old design; purchased by The Timesin London, the new printing press made newspapers accessible to the mass population for the first time.

The fashion for slab-serifs was only able to grow because the letter forms function so well on cheap paper, and under low-quality printing conditions.

‌So far we have talked about Serifs which generally dominate the print industry (though there is no such rule), and Sans Serifs which dominate the headings in posters and billboards as well the web publications (again no particular rule to follow). One thing that has changed with the advent of age of computers is the wide availability of softwares that allow a normal reader and designer like you and me to create our own custom fonts. This has led to proliferation in the number of amateur typefaces and their widespread availability across the web. This is probably the most exciting time in the history of typography of so far and we need to realise the power of typefaces and the way it changes information dissemination. This post is far from being a comprehensive guide to the rich history of typefaces. But that is not the point, the idea is to make all aware that something which seems so trivial and universal can have such an incredible historical journey and is still going strong.

Ever wonder how would someone like Gutenberg react to present day situation when printing and availability of text is ubiquitous and human beings are consuming information like never before all thanks to this amazing invention called internet.